“For a peaceful protest!” Ukrainian Initiative 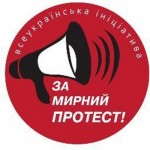 “For a peaceful protest!” Ukrainian Initiative started its activities in 2011. Institute “Republic” was one of 27 founding organizations.

Protection of the freedom of peaceful assembly in Ukraine is the main objective of the Initiative. During 2011 – 2013 the Initiative worked to reform the legislative field of this right, protected rights of activists to freedom of assembly in court, was engaged in information campaigns and education, developed its own network in the region with 148 organizations and 24 coordinators, and established bridges between local authorities and civil society activists and average citizens.

In October, 2013Euromaidan began in Ukraine and escalated into a revolt on November, 1 when Yanukovych’s government roughly violated the right of citizens to peaceful assembly using violence against protesters.

Today, the situation of peaceful assembly in Ukraine has new challenges that should be coped with: the radicalization of the population and creation of some paramilitary groups that oppose certain thematic assemblies, continued violations of freedom of assembly in courts and by local authorities.

Regarding these circumstances, Institute “Republic” continues to work on the protection of freedom of assembly in Ukraine in the following areas: reforming of the legal sphere on freedom of assembly, analyzing of potential activity of Ukraine’s population, promoting de-escalation of the conflict, spreading of the culture of peaceful protests and reporting on their effectiveness.

Project Manager: Volodymyr Chemerys, the Head of the Institute

More about the project: www.zmina.org.ua